The breed supposedly descended from Roman Briton’s small red cattle from centuries passed. They’re usually red with white patches. Calves sired by Hereford bulls almost always have the distinctive white head, and many farmers find this kind of easy identification to be an advantage in the selling market.

Many Hereford cattle are naturally polled after deliberate breeding techniques in the past. This can be beneficial to farmers who worry about the effort and distress of dehorning their herd. It’s an important factor to consider, especially if horned livestock will be living in close proximity to other animals.

Bulls weigh an average of 1,200kg, with cows weighing around 800kg.

Hereford cattle are bred to thrive in temperate climates such as in Britain and Ireland. Considering our weather is temperate, damp and without extreme temperature changes, Hereford won’t have many problems.

The mothering instincts of the dam are described as excellent, and they provide plenty of protection for calves in areas where predators may be lurking. This can be an advantage for farmers who are weary of the safety of new calves, but this can sometimes be considered dangerous if dams are particularly aggressive towards visitors in the pasture. Bulls, in general, always pose a threat to humans regardless of breed. It may be a good idea to take a look at our article on Bull Safety to remind yourself of good protocol in dealing with these animals.

The Traditional Hereford, as the original strain is called, is considered a ‘minority’ breed of genetic importance, whereby the genes of this breed are to be preserved for the future.

The cattle live quite a long time, and this reduces the cost of herd replacements for farmers.

Herefords have well-sought after qualities such as early maturity and a high libido. The gestation period for calves is shorter than the average for a cow of its size, making it an easier process for some Irish farmers as it reduces the costs involved in tending to a pregnant cow. The mortality rate of calves is also low, which is good news for farmers who worry about the complicated calving process. However, the breed is susceptible to vaginal prolapse, which can cause serious difficulties in calving. Improved nutrition in the diets of some cows has been linked to reduced cases of prolapse; however, always seek the advice of a trusted vet when in doubt.

Hereford cattle have great fertility, and dams reliably wean one calf per year. Even if low-quality or decreased volumes of forage are available to them, they still wean very successfully. Conception usually occurs from around 2 years of age.

The temperament of Hereford cattle is described as docile and pleasant, allowing for easy management of herds. This is a desirable concept for farmers who may have only themselves working on the farm. Dams are also easy to milk and are compliant with the process.

There are a few genetic problems inherited by some Herefords. Eye cancer is quite common in cattle bred in sunny regions; however, this may not pose any threat to Irish cattle experiencing low solar radiation. Sunburn can be problematic for Hereford cattle in Ireland though, as their pale udders remain exposed and can be affected by harsh sunlight in summertime.

Irish farmers of Hereford cattle are quite lucky in the sense that a number of Certified Hereford Schemes are actually in place around the country. These are premium beef schemes that offer bonus prices to producers of the breed, allowing for the description of Hereford beef as ‘high quality’ by Bord Bia.

The average finishing age for Hereford is approximately 18-20 months. According to Teagasc’s recommendations regarding carcass weight, the same amount of feed can provide excellent beef quantities for approximately 75 Hereford cattle against only 50 animals from other typical cross-breeds. The cattle convert their forage-based diets into muscle in an ideal time period, gaining weight with ease and providing a high-quality carcass.

For farmers wishing to finish cattle on a smaller farm, Hereford may be very suitable. According to Teagasc, 1 acre is the stocking rate per animal sold each year for the spring system for Hereford crosses, in comparison to 1.2 acres for continental crosses. 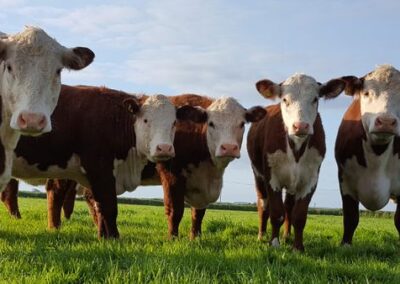 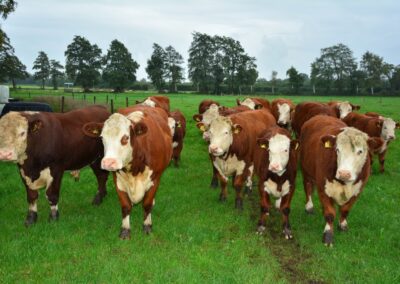 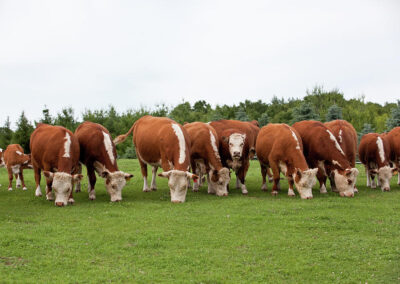 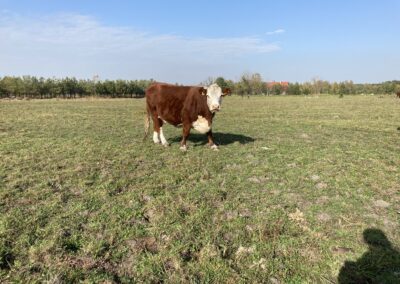 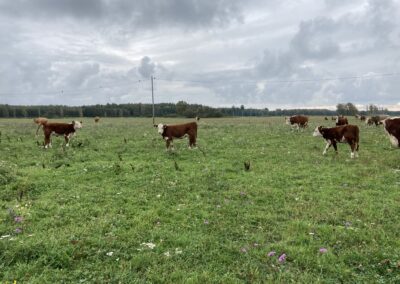 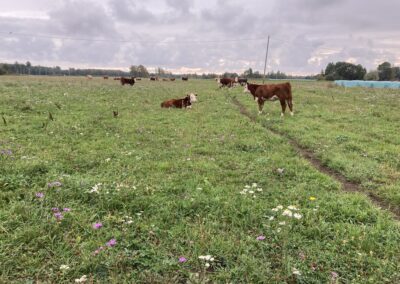 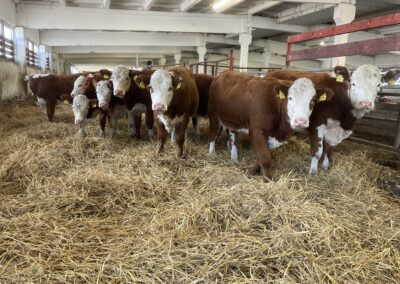