Jersey cows are among the most recognisable cattle in the world! The little dairy breed originates from the Channel Island of Jersey of course, with the first official records dating back to around 1700. They are the second most popular dairy breed in the world!

They are small-framed, with bulls weighing no more than 820kg on average, while cows weigh about 500kg at most. Their frames are quite dainty, making them an attractive little breed; not to mention their striking long eyelashes!

Their coat is usually fawn, but they can range from nearly black to a pale tan colour. This darker colour in Jerseys is often called Mulberry! Switches and mouths are usually black, with white hair around the muzzle and in other patches. Their hooves are black and tough.

Jerseys can adapt very well to extreme temperatures! They can thrive in the hottest parts of South America, but their coat can thicken during cold winters. Irish weather is no problem for this breed, since our temperate oceanic climate doesn’t range as far as scorching or arctic temperatures!

Jersey cows are known for being extremely docile. Their pleasant temperament makes them a popular addition to farms. However, they can be quite nervous and flighty compared to other breeds.

However, it’s worth noting that Jersey bulls are actually among the most aggressive of the entire bovine species! It’s vital to take caution around these animals. Read our article on Bull Safety for more information on steering clear of danger.

The breed has great longevity, cutting down the need for replacement costs for herds! This also allows for more lactations during the lifetime of cows.

Jersey cattle have excellent resistance against disease. Cases of mastitis and dystocia (difficult calving) are very low, with some studies showing that Jerseys are half as likely to suffer from udder problems compared to Holstein Friesians. This is handy for farmers who want to keep their herds healthy and productive.

Their black, sturdy hooves also make lameness a rare problem in the breed.

However, it’s important to remember that Jersey dams and calves are more likely to suffer from ‘milk fever’ than their continental counterparts. This is more accurately explained as a post-parturient hypocalcaemia. Symptoms such as weakness, unsteadiness and excessive attempts to keep lying down after calving should be noted with caution! Many researchers say that changing the dam’s diet before calving can help prevent milk fever, but since this illness can be fatal, please be sure to contact your vet if you have any concerns!

Apart from common cases of milk fever, the calving process is generally unproblematic. Jersey cattle are small at birth, weighing only around 25kg, which makes it easier on the dam. A study has shown that around 96% of births in first-lactation Jerseys needed no assistance, while second-or-more lactation cows had 99% unassisted births.

They have high fertility rates, and mature early! Many cows give birth for the first time after they reach 19 months. The calving interval also remains short.

Their milk is considered quite a luxury product across Britain and other countries! It has a high butterfat content of 4.84% which is 25% more than average milk, and protein reaches about 3.95%, which is 18% more than other breeds’ product. Jersey milk also has 25% more calcium than average!

A Jersey cow usually produces about 5,000kg of milk per year. This adds up to about 200,000 glasses of milk in one cow’s lifetime. However, there are some high-standard exceptions that can produce around 9,000kg!

Their efficiency in converting grass to high quality milk at low costs is an attractive trait. As well as this, some claim that Jerseys leave a carbon footprint that is 20% smaller than the average cow . 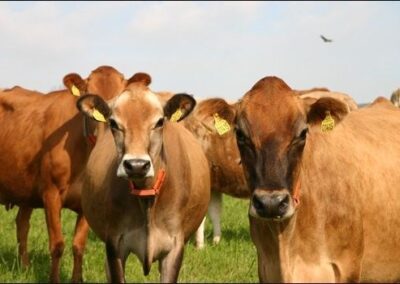 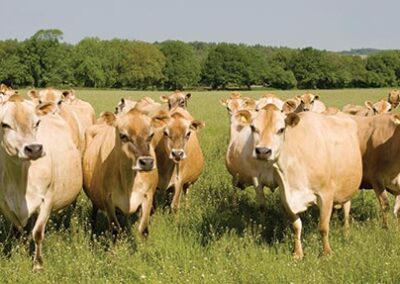 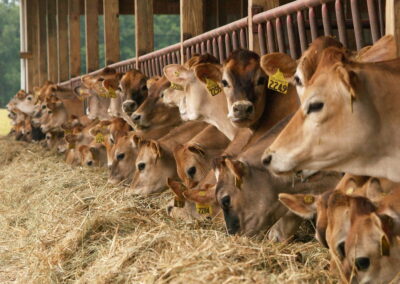 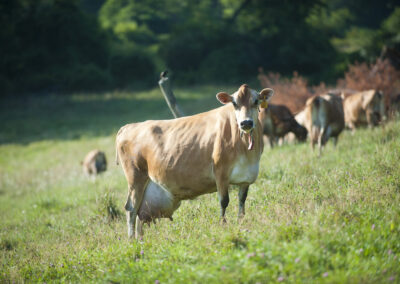 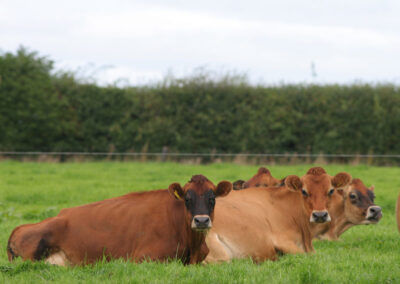