The Brown Swiss dairy breed is one of the world’s most productive dairy breeds, coming only second to Holstein Friesians.

The breed hails from the Alps in Switzerland and according to reports, they date as far back as 4,000BC! As is obvious by the name, the breed is usually found in a brown-grey colour, though tan and white variations are also accepted.

But would it be a worthwhile venture adding some Brown Swiss cows to your milking herd? What benefits can you expect to witness? Keep reading below and find out!

There are many benefits to adding Brown Swiss genetics to your milking herd, no more so than the improved yields.

Milking Performance – As mentioned, the Brown Swiss dairy breed is among the worlds most productive, coming second to only Holstein/Friesians. Brown Swiss cows can actually produce up to 9,000kgs of milk per lactation!

Milk Quality – Milk from Brown Swiss cattle is also of excellent quality and primarily used for cheese production. It contains a high butterfat content (4.17%) and is high in protein (3.5%). Their milk is also unique from other breeds in that is has longer fatty acid chains. It also has smaller fat globules in its cream, meaning Brown Swiss cream rises slower than others. Milk from the Brown Swiss cow has the closest fat/protein ratio compared to other breeds and Brown Swiss cows usually reach peak milk production on their fifth lactation.

Less care + Feed- Brown Swiss, due to their background, are very hardy in nature. This means they require less care than other breeds and they require much less feed. Brown Swiss cattle are also very resilient.

Strong – Brown Swiss cattle are also very resilient and have strong, sturdy feet, hooves and legs. They have less issues with lameness as other dairy breeds. Brown Swiss cows can continue producing up until the age of 15!

Adaptable – The Brown Swiss breed, due to their Alpine heritage, are capable of thriving in most climates. They can more than cope with low temperatures and have excellent foraging instincts, meaning they thrive on most pasture types. In fact, they can survive on rough forage.

Temperament – Brown Swiss cows are very docile in nature and are often described as gentle giants. This makes them more than suitable for use in an intensive dairy system. Many farmers swear by the temperament of the Brown Swiss breed and they are also known to be very clever.

Early Maturing – Brown Swiss cows can mature at just 332days old, while bulls are ready for mating at 12-14months.

Crossbreeding benefits – When Brown Swiss cattle are crossed with other breeds, the offspring are up to 15% more fertile! Also, Brown Swiss-cross calves are usually 5-10% heavier than other cross-continental breeds at weaning.

Although they do have quite long gestation periods, Brown Swiss cows are by far the champion of Purebred milk producers in the world. Hardy, long lasting, healthy and producers of an abundance of milk which is of excellent quality, you could do a lot worse than adding Brown Swiss cattle to your herd! 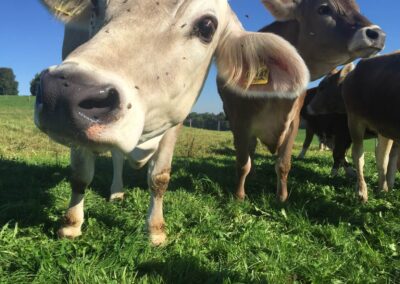 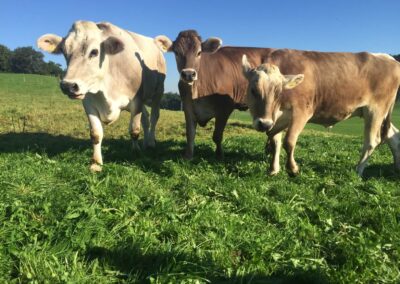 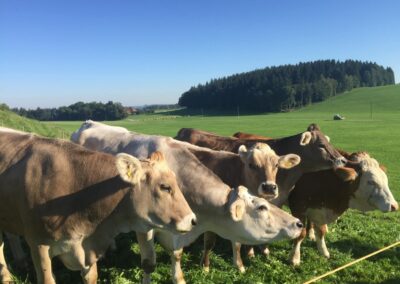 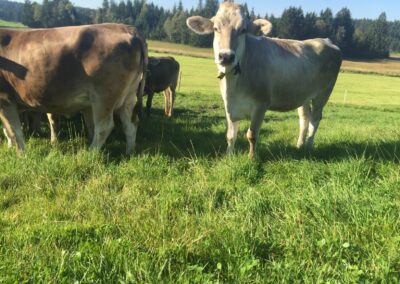 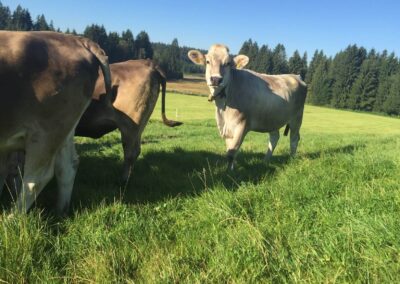 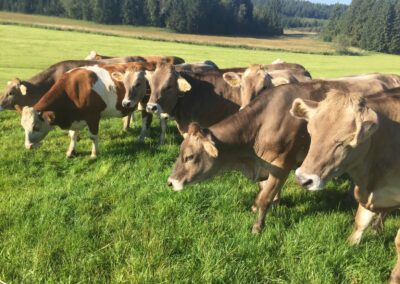 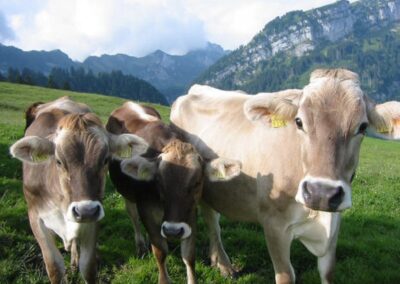