Like many popular breeds, Montbéliarde cattle originate from France. They are primarily used in dairy production, and their milk is often turned into cheese!

Their ancestors were Bernoise cattle, but nowadays they are their own distinct breed! Their name used to be Alsatian cattle, but changed to Montbéliarde after the Montbéliard region of France around the 1800s.

They are a red-and-white pied breed, usually, with mostly white colouring around their heads. Their feet are tough, as is their skin around sensitive areas such as the udders.

Although not as impressive in milking as Holstein Friesians, they rival them in some respects, since their beef qualities surpass that of Holsteins. There are actually traces of Red Holstein in modern Montbéliardes, after some crossbreeding during the 1970s.

They are a relatively large continental breed, with cows weighing nearly 700kg while bulls can weigh up to 1,200kg!

Montbéliarde cattle naturally horned, and this can sometimes be a trait farmers don’t wish to deal with. The effort and animal-distress of dehorning a herd can be avoided by breeding polled cattle, which is something to consider before choosing Montbéliarde.

Their temperament has been described as difficult by some farmers. They may be flightier and quite difficult to milk in some cases; however, isolated incidents don’t speak for an entire breed, so it’s important to make a fair decision on these cattle! In the case of bulls, extra care should always be taken, regardless of breed. Read our article on Bull Safety for more information on steering clear of danger.

Montbéliarde cattle are bred from quite changeable conditions in their native French region, so the Irish climate of no extreme temperatures changes isn’t a problem for the breed.

They live long and fertile lives, which reduces herd replacement costs and means more calves for the farmer! Even through artificial insemination, Montbéliarde cattle succeed with high conception rates.

Their long life also means that there are around 24% more lactations in Montbéliarde cows compared to other similar breeds! This can sometimes average out at around 5 more lactations per cow.

Their strong udders also mean that they have high resistance to mastitis. This is an attractive trait for farmers who wish to keep their herd healthy and productive!

The calving process is quite decent in this breed, especially when bred with Charolais. However, birth weights of Montbéliarde/Holstein calves are heavier, which could increase the risk of complications in some cases.

Their milk is widely celebrated, often used in the popular Emmental and Gruyère cheese types. Its high protein content of 3.45% makes it ideal for cheesemaking, as does the high frequency of kappa casein BB variants present in the milk. This causes higher cheese yields to be gained from Montbéliarde milk. The average Montbéliarde cow produces over 6,000kg of milk per lactation.

Their beef is considered quite good, especially since their excess body fat is low. Bulls are usually slaughtered at up to 570kg, dressing out at about 57%. Bull calves and cull cows from the Montbéliarde breed are also worth more than their counterparts, including Holsteins for example. 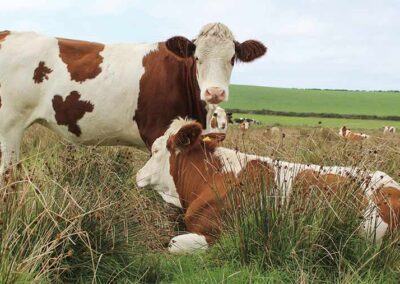 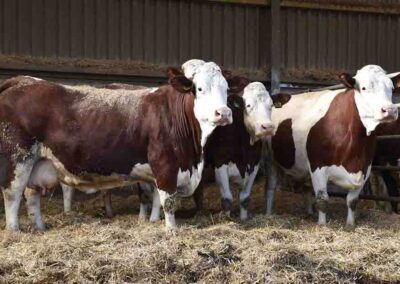 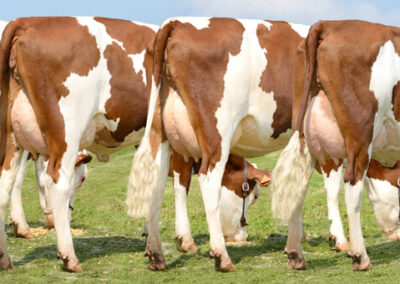 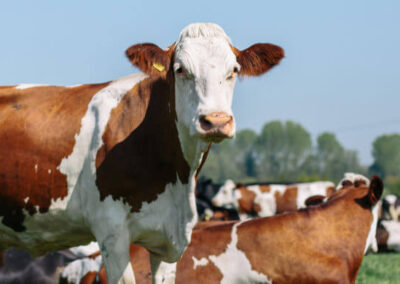 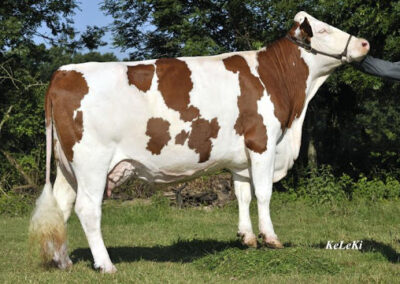 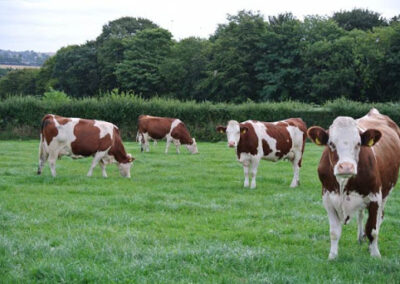 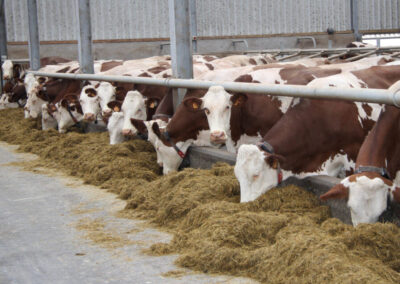 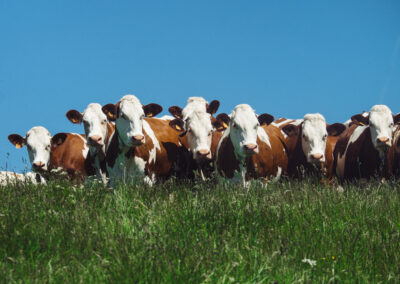