The Aberdeen Angus breed (or Angus as it is known internationally) was developed in the early part of the 19th Century from the polled and predominantly black cattle of North east Scotland known locally as “doddies” and “hummlies”. As with other breeds of cattle and sheep in Britain, establishment followed improvements in husbandry and transport. The earliest families trace back to the middle of the eighteenth century but it was much later that the Herd Book (1862) and the Society (1879) were founded. The early history of the breed is the history of its breeders, progressive lairds and farmers, of whom three were outstanding.

Hugh Watson became tenant of Keillor in Angus in 1808. He gathered stock widely and produced cattle of outstanding quality and character. Hugh Watson could be considered the founder of the breed, and was instrumental in selecting the best black, polled animals for his herd. His favorite bull was Old Jock, who was born 1842 and sired by Grey-Breasted Jock. Old Jock was given the number “1” in the Scotch Herd Book when it was founded. Another of Watson’s notable animals was a cow: Old Granny who was born in 1824 and said to have lived to be 35 years old and produced 29 calves. A vast majority of Angus cattle alive today can trace their pedigrees back to these two animals.
William McCombie came of a family of graziers and in early life was dealing in large numbers of cattle. He took the farm of Tillyfour in Aberdeenshire in 1824 and founded a herd of Keillor blood. His well documented close breeding produced outstanding cattle that he showed in England and France to establish the reputation of the breed.

Sir George Macpherson-Grant returned to his inherited estate at Ballindalloch, on the River Spey, from Oxford in 1861 and took up the refining of our breed that was to be his life’s work for almost 50 years. Both McCombie and Macpherson-Grant became Members of Parliament.

By line breeding and selection for type, the early pioneers established in Angus, Aberdeenshire, Speyside and the Laigh of Moray, the greatest of beef breeds. Stock from this area continued to lead the breed well into the 20th century while Aberdeen-Angus cattle became spread throughout Scotland, England and Ireland.

Black Angus are now the most popular beef breed of cattle in the United States with 324,266 animals registered in 2005.

Aberdeen Angus cattle are naturally polled and can be black or red in colour although black is the dominant colour, white may occasionally appear on the udder.

They are resistant to harsh weather, undemanding, adaptable, good natured, mature extremely early and have a high carcass yield with nicely marbled meat. Angus are renowned as a carcass breed. They are used widely in crossbreeding to improve carcass quality and milking ability. Angus females calve easily and have good calf rearing ability. They are also used as a genetic dehorner as the polled gene is passed on as a dominant characteristic.

Trials in northern and southern Australia have shown that Angus cattle are early finishing with good growth, eye muscle and yield. CRC crossbreeding research in northern Australia over Brahman cows shows that Angus have more marbling and the highest MSA eating quality results when compared to other breed crosses.

In the Southern Crossbreeding Project conducted by South Australian and Victorian researchers, Angus cross calves had the lowest birth weights, similar growth to weaning and in the feedlot, finished earliest and produced the most marbling.

Angus are a truly international breed, they are the dominant breed in the USA, Canada, Argentina, New Zealand and Australia.
In Australia one in four cattle registered are Angus plus at bull sales, 30% of cattle sold are Angus.
Angus have also spread to South Africa, Brazil, Denmark, Norway, Sweden, Spain, Germany and of course they still remain popular in Britain. 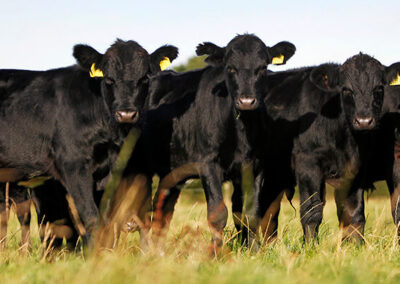 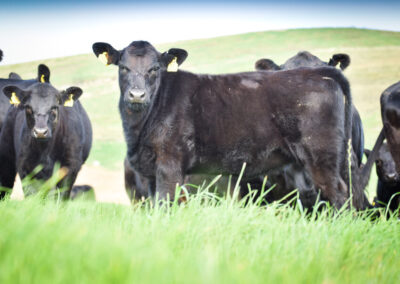 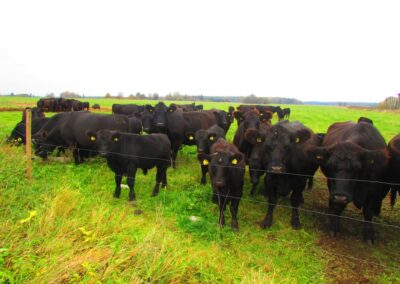 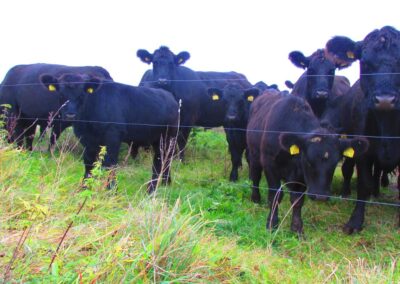 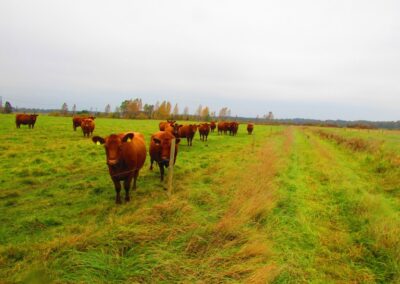 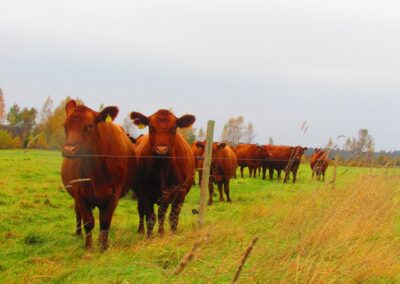 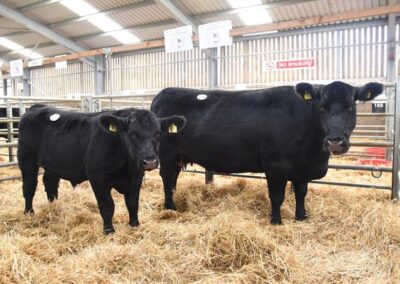 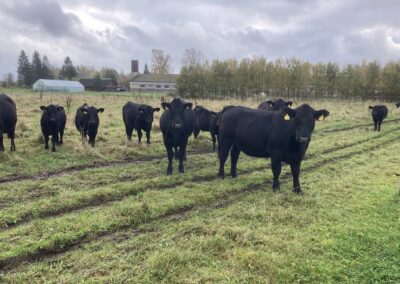